KNOW WHERE YOU STAND ON THE FUTURE OF O’DEVANEY GARDENS 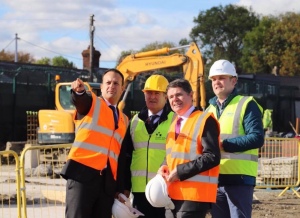 Throughout the last four years, I have regularly updated you on the progress being made to ensure new homes are built in O’Devaney Gardens. In July 2018, actual construction work on the first 56 PUBLIC homes began. This building work is advancing well and is on schedule to be completed next year.

Separately, plans to build 769 new owner-occupier, more public and affordable homes on the rest of the O’Devaney Gardens lands have reached a stage where a draft development plan with a contractor has been agreed. For that development plan to be implemented, Councillors must vote to approve it and that vote is scheduled for October 7th next in City Hall.

I will be VOTING to ADOPT this draft development plan. I have detailed my rationale for supporting the building of 824 new homes below. There has been much inaccurate and false information circulated about these plans. I want to clarify the situation for you and provide you with the information Councillors have received so that you know what exactly it is that Councillors will be voting on.

As always, if there is ever anything where I can be of help, please contact me by phone, text or email.

The building of homes, of which 50% will be owner-occupier, 30% public housing with the remaining 20%, a mix of affordable purchase and rental.

The redevelopment will take place in partnership through the establishment of a Development Agreement (Plan) between Dublin City Council, Government and a Private Developer or Developers.

No design difference between the three tenure types.

Discount on the Public and Affordable homes from the market price.

Local Employment clause ensuring that a minimum of 10% of workers on site are local.

192 (+56) homes will be Public Housing under the control of Dublin City Council.

165 homes will be available for purchase through an Affordable Housing Scheme.

411 homes will be available for purchase on only 22% of the available lands in O’Devaney Gardens.

New local amenities including Public Park, Public playground, Creche, Community Space and a Community Campus on Infirmary Road (something I have worked on with the co-Chair of the Consultative Forum).