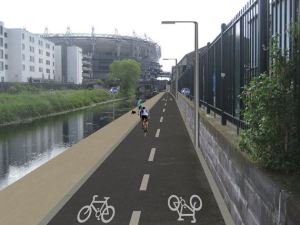 As you know, I have been repeatedly seeking confirmation from Dublin City Council that construction on the new Royal Canal Greenway begins. I sought further details at the January meeting of the North Inner City Area Committee yesterday (January 9th). Engineers have now advised the following, in respect of Phases 2, 3 and 4.

Phase II
Detailed design and production of tender documents has been completed for Phase 2 of the Royal Canal Greenway. These documents are due to be issued to the tendering contractors week commencing 8th January 2018. Commencement of construction will be dictated by the successful outcome of the tender procedure and also the securing of a third party approval agreement with Irish Rail. Council Engineers have stated that “this agreement cannot be finalised until the Commission for Railway Regulation have completed their review”, therefore it is envisaged that works will begin on site Quarter 2 or early Quarter 3 this year.

Phase III
Detailed design of Phase 3 has been completed and draft tender documents have been prepared and have been checked by the National Transport Authority & Dublin City Council. Following completion of updates and securing of agreements with Waterways Ireland and Irish Rail, the City Council is aiming for this phase to advance to tender in Quarter 1 and commence on site in Q3 this year.

Finally, some good news….Phase IV
The National Transport Authority has advised Dublin City Council that it may now proceed with the detailed design of phase 4 of the project. This has meant that tender documents are being prepared in advance of the procurement of a Consultant. Dublin City Council Engineers envisages that this process will be completed by the end of Q1 and that detailed design & tender preparation will follow and will be completed by end of Q4 2018.

So many dates have now been shared by the City Council with regards the start of construction work for the Royal Canal Greenway. Until a contractor is selected and on site, I will continue to monitor this project closely to ensure we these works start. The provision of a dedicated cycle and pedestrian greenway along the Royal Canal between Sheriff Street and Ashtown will a great addition for the communities of East Wall, North Strand, Ballybough, the City Centre, Phibsborough and Cabra to enjoy and benefit from.

My Tweets
Councillor Ray McAdam So, just when will work start on the Royal Canal Greenway?
%d bloggers like this: