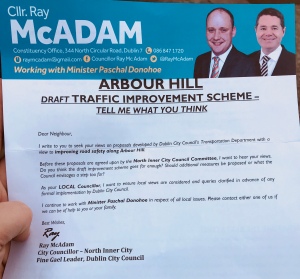 Earlier this year, the Transportation Department of Dublin City Council undertook a Speed Survey along Montpelier Hill and onto Arbour Hill as far as the junction with Manor Street. While the area is included in the City Council’s 30km/hr Speed Limit, the surveys showed that the average vehicular speed was significantly higher than the 30km Speed Limit set for Montpelier Hill and Arbour Hill.

Transportation Engineers have recommended that as a result of the information contained in the Speed Surveys that an Improvement Scheme be developed in order to combat the higher than expected vehicular average speed along Montpelier Hill and Arbour Hill.

The North Inner City Council Engineer reported back to me this week advising that six separate proposals are included in the draft Arbour Hill Traffic Improvement Scheme. Full details of what has been proposed are detailed overleaf.

The primary aim of the DRAFT Arbour Hill Traffic Improvement Scheme will be improve pedestrian provision along the route, reducing driver operational speeds while at the same time enhancing the public realm and streetscape along Arbour Hill and Montpelier Hill.

Therefore, it is proposed that:

1. A footway is provided along the south side of Arbour Hill between the junction with St. Bricin’s Park and the Museum entrance to Collins Barracks. Installing such a footpath will result in the narrowing of the existing road lanes which should help to reduce vehicular speeds.

2. Formalising the on-street parking which occurs along both sides of Arbour Hill through the use of road markings and by installing new kerb and footway build-outs.

3. A footway is provided along the east side of Arbour Hill between the junction with St. Bricin’s Park and the junction with Montpelier Hill. Installing such a footpath will result in the narrowing of the existing road lanes which should help to reduce vehicular speeds.

4. New on-street parking along Arbour Hill is provided and that the existing parking on the street be formalised through the provision of kerb and footway build-outs.

5. Dedicated cycle lanes are provided which is subject to detailed design.

6. Build-outs are constructed at strategic locations along both sides of Arbour Hill to incorporate the planting of trees.

WHAT ARE THE NEXT STEPS?

I want to hear from you before the October meeting of the North Inner City Committee. At that meeting, I intend to share with the local Engineer the views, concerns and put forward any questions that you may have about the proposals contained in the DRAFT Traffic Improvement Scheme. Once I have secured your views on the matter and clarified any issues that may arise with officials, I will confirm with the Transportation Department of Dublin City Council and the North Inner City Area Office an indicative timeline for the implementation of this scheme. In terms of funding, earlier this year, as Chairman of the North Inner City Committee, I secured some funding for the improvement of road safety in the Arbour Hill area but additional monies may be required in order to complete all aspects of the DRAFT Traffic Improvement Scheme.

HOW YOU CAN HAVE YOUR SAY

The North Inner City Committee will meet next on October 9th in City Hall at 10am. Please email me with your views on the DRAFT Arbour Hill Traffic Improvement Scheme before Friday, October 5th next. My email address is raymcadam@gmail.com.