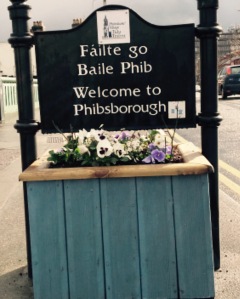 Earlier this year, I worked with the local community to have Cherrymount House, just off the North Circular Road, added to Dublin City Council’s Record of Protected Structures. Residents petitioned the Conservation Section of the City Council and I liaised with officials to advance this request. Following the completion of the necessary statutory process, the Conservation Department considered that Cherrymount House was a property of regional significance and should, therefore, be included in Council’s Record of Protected Structures. I am delighted, in working together, I and the local community were able to ensure that a building of such importance and significance will be protected from demolition or destruction.

As Halloween approaches, the Public Domain Office of Dublin City Council will direct Litter Wardens to visit tyre retail premises to ensure that tyres are properly disposed. Furthermore, litter wardens will seek to ensure that premises reduce waste tyre stock in. Litter wardens will also contact Market businesses regarding the storage of pallets within markets located across the North Inner City. Environmental Services officers will also monitor and inspect sites or properties that have ‘traditionally’ been used as storage areas for tyres and pallets. If you come across any materials for bonfires being stored nearby, please contact either myself or the Public Domain Officer at 1800 248 348 or litter.central@dublincity.ie.

An Garda Siochana’s operation to police the Halloween period has kicked into effect. The approach undertaken by the Gardai centres on:

➢ Deploying hi-visibility patrols throughout the North Inner City to tackle any anti-social behaviour, or other criminal behaviour.

➢ Deploying an overt Public Order Unit capability on Halloween night across the North Inner City.

➢ Establishing a liaison with City Council Area Managers and other agencies to ensure there is a co-ordinated approach to help reduce the availability and prevent the use of tyres as combustible material.

➢ Intelligence led operations to prevent and detect the organised importation for the sale of fireworks, between now and Halloween.

➢ Auditing areas across the North Inner City for skips and ensure that all skips are removed or properly secured to prevent the contents being set alight.

These plans are designed to ensure public safety and an environment conducive to the public’s enjoyment of this holiday period.

Since my last update on the delivery of a dedicated cycle and pedestrian route along the Royal Canal, a number of issues have arisen which have delayed construction work on the project to begin. Dublin City Council has added the upgrade of a road junction to the Phase II programme of works. The initial phase of the tendering process has now been completed with Council officials expecting the second stage to start in November. All going to plan, it is anticipated that construction can begin on March 29th 2018. In terms of Phase III of the project, between the North Strand Road and the Phibsborough Road, the Council has had to review the documentation surrounding the cost of the project, meaning that tender documents should now be issued in December 2017. It is anticipated that the Contractor will be on site before the end of April 2018. The project requires certain approvals from Waterways Ireland. We have made the relevant submissions to Waterways Ireland. It is normal that most decisions are referred to the North South Ministerial Council. The absence of a Government in Stormont poses a serious risk to the start date. The Contractor cannot start until all licences and easements from Waterways Ireland are in place.
COMMUNITY GRANTS SCHEME 2018 – APPLICATION PROCESS OPEN!

The Dublin City Council Community Grant Scheme is now open for applications. The closing date is the 27th October 2017. All applicants for the 2017 scheme will be sent an application form for next year’s scheme. ALL APPLICATIONS should be returned to: Community and Social Development, Block 3, Floor 1, Civic Offices, Wood Quay, Dublin 8. More information can be accessed through http://www.dublincity.ie or by contacting the Community & Social Section of the Council at Tel:2222148 or by email at doce@dublincity.ie.

TACKLING THE SCOURGE OF DOG FOULING

The Dublin Central Area Office of Dublin City Council has commenced a pilot programme to help reduce the scourge of dog fouling across the North Inner City. Officials have identified a number of areas where the initiative will be trialed. The pilot areas include the Royal Canal Walkway, Blessington Street Basin and Fontenoy Street. Dog dispensers and bins will be installed with dog bags distributed to the public in order to promote awareness of the good practice in cleaning up after your dog. Mobile units will move from area to area in order to help combat dog fouling on our streets.

At the request of residents in Phibsborough, the Transportation Department of Dublin City Council is considering a number of traffic related requests across the district. These requests involve:

– The installation of Double Yellow Lines on Wellington Street at the junction with Mountjoy Street.

– Introduction of a One Way system along Royal Canal Bank.

– Repainting of ‘NO ENTRY’ signs on Killarney Parade.

– Erection of ‘CHILDREN CROSSING’ sign on Glengarriff Parade at the junction with St. Ignatius Road.

Disappointingly, the Traffic engineers refused the request for the ‘CHILDREN CROSSING’ signs on Glengarriff Parade. Engineers are only assessing the request for the introduction of a one way system along Royal Canal Bank. Before a recommendation is made, I would be interested in hearing your views on the idea and whether you think it would be effective and if it would be safer for road users and pedestrians alike? Email me at raymcadam@gmail.com with your opinion.

The third meeting of the Group responsible for the implementation of the Phibsborough Local Environmental Improvement Plan took place recently. Officials outlined actions steps that had been taken to implement the 41 various objectives contained in the plan as well as engaging with local community groups and residents association, at my urging, so that contentious proposals are discussed and details shared. In addition to the Royal Canal Greenway delay, updates were provided in four key areas, including:

– Following the concerns of residents about the City Council’s Landscaping & Play Plan for Great Western Square, I have arranged for the Great Western Square & District Residents Association to meet those officials to discuss all aspects of the proposal.

– The Transportation Department of the City Council will shortly begin a formal review process of how the introduction of the new 30km/ph speed limit is working across Phibsborough. Any remedial or engineering interventions which may be required will be considered as part of this review.

– Construction work will begin in January on the provision of 13 new bicycle parking stands across Phibsborough. These new stands will be located at:

• 4x stands, just off Phibsborough Road at the Library on the North Circular Road.

• 5x stands, at the Mater Hospital on the North Circular Road.

– The Property Disposal of Dublin City Council is continuing to negotiate with the Transport Infrastructure Ireland to extend Mount Bernard Park. Ground investigations and the cost of remediating the site in question are two of the issues that have prevented an agreement being reached. I will work to keep residents updated of developments in this regard.

Our Fine Gael-led Government recently announced details of a new grant aid scheme to assist local groups in establishing community-based CCTV systems. Under the scheme, eligible community groups can apply for up to 60% of the total capital cost of a proposed CCTV system, up to a maximum grant of €40,000. Upon approval of the grant, the applicant will receive an upfront payment of 50% of the grant with the balance to be paid when the system is fully operational. €1 million has been provided by the Government in Budget 2017 and it is planned that similar funding will be available across each of the next three years. Such community run schemes, when operated in conjunction with a text alert scheme helps to give our communities an enhanced ability to be proactive about the prevention of crime locally. Further details of the scheme are available by contacting the Department of Justice at communitycctv@justice.ie.

Following the very unsatisfactory manner in how Dublin City Council advanced a variety of options for the delivery of the Liffey Cycle Route, the National Transport Authority has directed the Council to suspend all works on the project. The National Transport Authority has now indicated that an Independent Third Party will undertake a review of the entire project and the various proposals that have published with regards how the Liffey Cycle Route can be delivered. Over the past twelve months, I have reiterated my opposition to Option 7 given the potential impact this proposal would have on Stoneybatter, Infirmary Road, Arbour Hill, Smithfield and the wider north-west inner city. No timeline has been provided by the National Transport Authority for the completion of this independent review and as Chairman of the North Inner City Area Committee, I have already sought a firm commitment from the National Transport Authority that the local community will be afforded the opportunity to input directly into this review. With that in mind, I invited the Save our Streets Campaign to speak at the North Inner City Area Committee meeting in City Hall on October 10th last to begin that process.

One thought on “Phibsborough Matters – Autumn 2017” Leave a comment ›